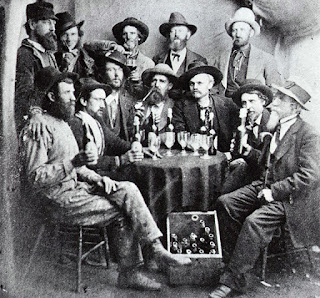 The June meeting of BASH was held at the home of Judy and Walt Crawford. We were lucky in that it didn’t rain and there were no mosquitoes. Walt and Judy prepared cheeseburgers in paradise and we all enjoyed a fabulous dinner. Judy led us in song to the words of Jimmy Buffet’s “Cheeseburger in Paradise” to work up our appetites. We met three new prospective members, Eric Linssen and Victor and Josie Aguilar. Treasurer for Life Carroll announced that they couldn’t join until July as that is renewal month for all and this would be their complementary meeting. All attendees were shocked to the core to actually hear Carroll turn down money. We will be working with Dr. Lou to get a diagnosis on this sudden change in Carroll’s behavior.

Outgoing President Sabrina called the meeting to order after the competition was tasted. Carroll reported that we are ending the year with 45 paid members. We discussed our new Facebook group page and those that had visited were lavish in their praise. It is a closed group so to get access, members have to request admission. Normally that is approved within a day as we have several approval authorities. New member, Steve, noted that he is a BJCP judge (only one in South Texas) and would put on a class for those interested in taking the test. Several folks signed up and he may have to make that 2 classes. More on that at the July meeting. Daniel announced that his AHA National entries didn’t place at the National level but placing in the Southwest Area comp is still pretty impressive. After the meeting, we found Daniel took first place with his Pineapple Pale Ale in Category 24 at the ACCF in San Antonio. Some may remember that this is the beer he brewed, extract based, at our April Meeting. We closed the meeting by electing officers for the next year. Daniel F. will be Presidente, Mike W. will continue as VP and Competition Chair, Wild Bill and Carroll will continue as secretary and treasurer also.

We were fortunate to have many new homebrews to sample. Paul H. brought a Best Bitter, Jeremy a Mosaic IPA, Carroll an English Brown (what a surprise), Mike a SMASH beer, Steve a Belgian Cider, guest Eric a Chocolate Stout, Sarah also a chocolate stout, and a mystery beer and guest Victor a Citra Pils. Of course, there were many commercial beers to fill in the blanks between homebrews.

Thanks again to Judy and Walt for a fabulous time. Hope you get rid of the tomatoes, Walt.
Posted by Erik Hinz at 7:31 PM No comments: