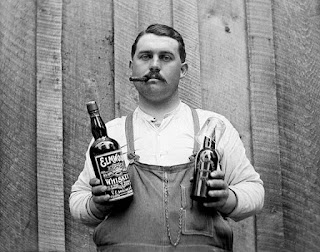 The October B.A.S.H. meeting was held on Sunday the 11th in half of Andrew Herzig and Sabrina Krueger‘s backyard, while three chickens held a hen party in the other half. Other than some occasional foul language, the chickens were pretty quiet. El Presidente Sabrina called the meeting to order, welcoming Micah Cole’s wife Alicia and new members Jim and Tracy Hildreth. Carroll Pate gave his usual Treasurer’s report and announced that he will be serving carnitas at the December meeting. Cory Mathews reported that 15 entries were received at the 1st annual Surftoberfest homebrew competition. Member Sean Sutherland won with his Belgian dubbel. Paul Holder told us about a movie he watched recently about the influence of beer on history.

Tom Freund and Paul reported on the new format to be tried at next months’ Iron Mash XII. The teams will brew an American porter or English porter, based on the BJCP 2015 style guidelines. The pallet of ingredients will be presented to the teams at high noon. They won’t have to use all the ingredients, but can’t add anything else (other than water and yeast). As always, the results will be judged at the January meeting. Three teams signed up.

The competition this month was for sour ales, 2008 BJCP categories 17A-F. Aggie Bill Hughen collected two points for his winning blackberry sour and one point for his second place blueberry sour. Paul’s raspberry sour came in third. Year-to-date results after 5 of 6 competitions are as follows:

All humans and chickens had a good time, eggxactly as expected!


Thanks again Andrew and Sabrina, keep on brewin’ and we’ll see you next month at Iron Mash and at Mark Woerner’s!
Posted by Erik Hinz at 6:34 AM No comments: