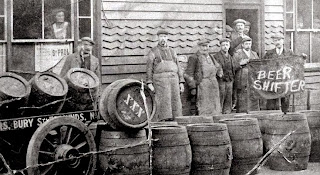 The November B.A.S.H. meeting on Sunday the 9th was hosted by the recently engaged Andrew Herzig and Sabrina Krueger. Club President Cory Mathews called the meeting to order. Treasurer Carroll Pate gave his usual positive report. We congratulated member Mark Woerner on his election as County Court at Law #4 Judge.

Paul Holder gave an update on Iron Mash XI. With this years’ selection of ingredients, Paul and Tom Freund challenged the five competing teams to break some brewing paradigms. First of all, a small quantity of liquid malt extract was included. This made it difficult to brew a high gravity “big beer”. Some teams solved this challenge by brewing less than five gallons. Secondly, the ingredients included only low alpha acid hops, making it difficult to brew an India pale ale. One way around this is to wait until the last ten minutes of the boil to add the extract, thereby maximizing hop extraction. Another curve ball thrown at the teams was that all the grains were dark, crystallized or caramelized, and thus low in diastatic power. There was no need, therefore, to mash the grains for an extended period – a simple 20 minute steeping would suffice. The final lesson is to declare a beer style per BJCP guidelines matching the beer as brewed, not the desired beer.


Wild Bill is thus B.A.S.H. Homebrewer of the Year for 2014. He wishes to thank his Mom, your Mom, Luke’s Mom and the members of The Academy.

Travis Clapp was a no-show, so the chickens were safe!


Thanks again (and congratulations) Andrew and Sabrina, congratulations Mark and Wild Bill, keep on brewin’ and we’ll see you next month at Carroll and Judy’s!
Posted by Erik Hinz at 12:25 PM No comments: