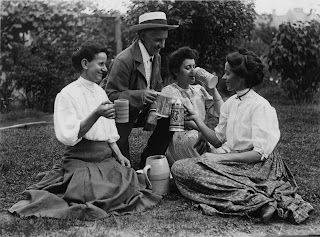 The January B.A.S.H. meeting was held on Sunday the 10th at the home of Tom and Rocky Freund in Flour Bluff, co-hosted by Aggie Bill and Dianna Hughen. We welcomed newbie David Raymond and old timer John Cox as El Presidente Sabrina Krueger called the meeting to order. Treasurer Carroll Pate’s report wasn’t quite as rosy as usual, but sufficed in a pinch. In old business, Paul Holder and Tom reported on the test results from their Flour Bluff pale ale, December’s demonstration brew. The ABV was 5.6% and the IBU’s were 26. By Paul’s diabolical calculations, the local Cascade hops contained 2.0% alpha acids. In any case, the taste was delicious!

In new business, we found hosts for several upcoming meetings, but are still seeking homes for the April and June shindigs. Walt Crawford is looking for a 6+ gallon brew pot.

After the opening frivolity, we got down to serious bidness – judging the beers from November’s Iron Mash XII. Past winners were encouraged to wear their coveted bling medals. Poor Mark Quade was hunched over from the extraordinary mass of shiny chrome dangling from his overmatched neck, representing several past wins. Mark teamed up with Mark Woerner and Micah Cole to form the aptly named Repeat Offenders (AKA the Inveterate Miscreants). Daniel and Jessica Fearn partnered with Geoff Whirty to form Team Red Shirt. Jim Hildreth, Mike Wojdyla and Craig Gann were the Porter Waggoners. A-Train Almendarez, Patrick Viles and Clinton Schena comprised Team Thunderhunt. Each team brewed at least one American porter. (Several teams split their wort among multiple fermenters, pitching different yeast into each to create more than one finished beer). In total, eight brews faced the gauntlet of discerning judges. With a final score of 164 points, one effort by the Porter Waggoners captured third place. Runner-up went to Team Red Shirt, whose single product scored 177 points. With one of their beers scoring 183 points, the Iron Mash XII champions are the Repeat Offenders. After the traditional victory photo with their bling medals, we bundled Mr. Quade off to the chiropractor. Despite our darkest fears, Travis Clapp did NOT show up to drink from the Iron Mash trophy. Phew!

The hardcores were still surrounding the bonfire at 10:30 p.m. when your humble narrator slinked off. The most embarrassing quote again came from noted pyromaniac Mike – “Craig gives me wood!” Let’s hope he was referring to fuel for the raging inferno …


Thanks again Tom, Rocky, Aggie Bill and Dianna, congratulations Mark, Mark and Micah, keep on brewin’ and we’ll see you next month at the Fearn’s!
Posted by Erik Hinz at 5:54 PM No comments: